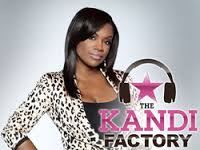 Chile well here comes something that I knew was coming, Kandi Burruss’s hitmaker show, The Kandi Factory, is no more. The reality starlet confirmed the news to a fan on Twitter saying that her spin-off show would not be coming back for another season. Let’s be real who looked at that show? It would have been great but it did miss some key things. I will not go into what was missing but i will say it lacked substance.

The show followed music industry hopefuls as Kandi selected two “protégés” for diva training. Personally, we loved it, but it looks like Kandi’s freeing up her time for other project.
She’s currently filming Season 6 of The Real Housewives of Atlanta and since she’s currently engaged to former RHoA production crew member Todd Tucker, we have a feeling that a wedding spin-off may be in the reality star’s future.
Kim Zolciak’s Don’t Be Tardy For the Wedding was a big hit for Bravo and NeNe Leakes’s I Dream of NeNe: The Wedding is set to air on Sept. 17.

We don’t think Kandi’s nuptials would be quite as extravagant, but she and Todd really seem to care for each other, so we’re sure their big day will be beautiful.
So no tea no shade, I don’t want to see Kandi get a wedding special. Her wedding gown will probably come from david’s bridal and todd’s tux will come from Goody’s. Chile I will pass on that boring ace of spades.

FlyGossip Guy
THE SHADE IS REAL