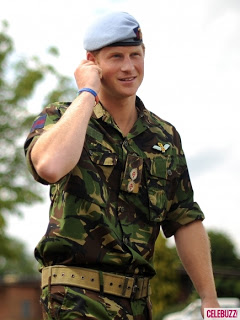 The Playboy Prince has precision in the party scene and in the war field. Prince Harry has reportedly killed his first Taliban commander in Helmand, Afghanistan, The Sun has revealed.

The 28-year-old royal gunship co-pilot was called on to unleash a missile strike to eliminate a senior terror leader, according to a defense insider, who told the British newspaper that Harry, dubbed “Big H” is a “legend.”

“We were on patrol and the Apache helicopters were called in,” the source said.

“We heard this posh voice come over the radio and knew it was Big H. They were tracking a Taliban leader — he was commander level.”

The source added, “The Apache then let off some Hellfire missiles and its 30mm cannon and ‘boom’. It was Big H all the way.”

The strike reportedly occurred in late October during a partnered patrol with Afghan troops hunting the Taliban chief.

It’s a decidedly different change of pace for Harry, who had a notorious wild night in Las Vegas in August when he was photographed canoodling naked with a woman after a game of “strip billiards.”

British-born Carrie Reichert told the tabloid The People: “We kissed, he was naked at the time and pretty open. It was a drunken fumble. It wasn’t romantic, just fun. He was a gentleman, but he was so wasted. The alcohol affected him. I was there for 15 to 20 minutes.”

Before Harry went to Afghanistan, he trained in the U.S. desert. Watch a video of his mission, below.

Posted by thegagandthetea on December 24, 2012 in Prince Harry, Taliban, War