Well Honey Boo Boo Child, tonight’s episode of the housewives of Atlanta was a one to remember. So bring a nice juicy peach, a prayer cloth, and a chair. Because I am going to provide you with the shadiest Rooibos Tea that has hit your Tv screen tonight. Now the reason I chose this Tea is because it comes in a variety of flavors and thats what this show was tonight, all kind of flavors. 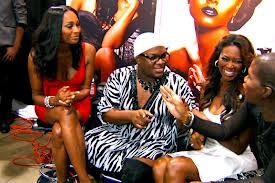 So they had the nerve to start this show out with that Derek J and that god awful looking Lawrence looking like the Crypt Keeper. Kenya starts off by trying to throw shade about she didn’t want to hear what that Phake-dra was saying when it came to that video deal. Its might funny she didn’t want to talk about it but thats the first thing she starts off every conversation. “Chile Cheese”. Kenya wants to say that this Stallion Booty is everything that a woman would want, clearly that messed up skin has messed with her blurry vision through those foggy colored contacts. If you just take a look at Kenya’s Booty you will see that it looks like Sponge Bob Square Pants. I can’t deal with this Kenya tonight.

Nene says she is not going to be apart of all this drama that you foolish women are engaging in. She says she is a GlamMother and she don’t have time for all that foolishness! Bloop Bloop!

Ok I don’t know why, but is it me or did I miss Derek J shampooing Kandi’s hair tonight? I know I didn’t miss anything I just had to be politically correct before I went in on these two shelf elfs! So Derek J is spilling all the gossip from the conversation from the hair show. Kandi couldn’t even let him finish before she pulled her phone out to call Phaedra. Chile Kandi is a Messy Jessie hunnie. She will carry all the information from one destination to another . Hell she almost like AT&T she always want to reach out and touch someone. Gurl sit down and get that stiff greasy hair shampooed! So now Phaedra is like dang, I knew she was Thirsty! But I didn’t know she was Hungry! hunnie leave it up to Phaedra to give you the best analogies known to men to say! I know this all off the subject, but can someone tell me why that Derek J won’t get a hair cut since his scalp is about to pull up on the scene and his hair is definitely missing! Chile I am just saying DANG, Just cut it all off! Oh I almost forgot his little friend in the back of his head. I got one word LIPO! Because I am tired of looking at that fat roll! No God Miss I wear high heels and tote a purse everywhere I go! (DEAD)

Cynthia has really grown up to be a BAWSE this season. That Miss Girl is READING for her life tonight. I guess she has took some pointers from her Actress BFF Nene! So Cynthia is hosting this modeling event and she is teaching her students how to walk in this fashion show. I am sitting here looking and why is that lady in that red dress standing there looking like Wanda from InLiving Color! I mean dang when you know there is a possibility that you might be filmed, Please be camera ready, Its not that hard TRUST ME!

Porsha girl, you punched right on in and handed out the shade tonight! You let Phaedra know that Kenya is a slap fool. I love you for this Read. Why Ms Cynthia was sitting there giving Porsha and Phaedra that Auntie look like, I told both of you in the beginning that she was a loose goose look. So Phaedra gives us another piece of her southern dictionary by letting us know that Kenya drinks like a fish and act like a fool! Phaedra says that Kenya is really Bipolar and she need to get some medication quick fast and in a hurry!

So just when I thought Kandi couldn’t look anymore Basic than she looks, She pops up on the scene with the stallion booty Kenya and a dress probably from her store! I mean from the head to toe her look was hurting my eyes, That Basic Hair, then that ugly dress and then her Big ole mouth! She is really coming out to really talk too much about all the other girls. She might call it being honest but in my world we say she is being MESSY! Now Kenya wants to persuade Kandi that Phaedra is wrong. She should already know that Phaedra is Kandi’s dogg and she is not going to let you talk about her friend like that. So Kenya stand down and put your tail between your legs and just go home to LA! So this little clear man ws standing there listing to their conversation then when they are about finish he says let me let you two talk. Man you have already listened this long you should have just stayed! 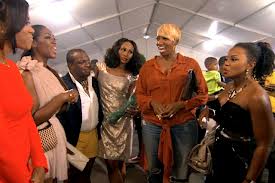 Phaedra and Kenya is like oil and water now. They will never be friends. Phaedra calls Kenya the devil’s little sister. Then Kenya calls Phaedra ” Shady Phae Phae, because she is playing you like a fiddle, referring to Porsha and Phaedra’s friendship. Hunnie I just fell on the floor and My eyes popped out. These southern ladies are too much tonight. Kenya really tries to talk this Stallion Video up saying most women wants to be a stallion! Not in Phaedra’s eyes she lets Kenya know that a Stallion is a male horse. Chile she has called Kenya a Drag Queen. see this right here is the hottest mess ever!

I am ending this with Phaedra’s funniest phrases yet, “tootles Ms America, I meant Ms RATCHETT USA”. Now you can take that laugh all the way to the bank because that was too funny.

Sidenote: Ms Porsha, THE BLACK BARBIE! Hunnie u looked like a Special Edition Holiday Barbie with that red dress on during your interview scene! Chile that face was Dusted and that hair was Layed o all the GREEK GODS. U DID THAT MS GURL!