BasketBall Wives LA will be returning with TWO new LADIES 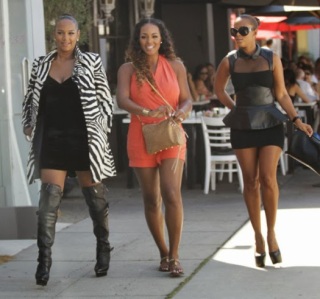 VH1′s not panicking over all of the cast mates that have left “Basketball Wives: LA” because they were easily replaced.
On the heels of news that Brooke Bailey has become the fourth cast member to chuck the deuces to “BBWLA,” production for season 3 has gotten underway. Prior to this, Gloria and Laura Govan announced that they were getting their own show. Bambi, although she didn’t officially announce her departure, will presumably be a more permanent fixture on “Love & Hip Hop: Atlanta” since she’s dating Lil Scrappy.

While losing more more than half of your cast for a given show would concern most networks and producers, VH1 seems to have bounced back pretty quickly. Recently “BBWLA” grande dame Jackie Christie was spotted shooting scenes for the show with two new cast mates.
One of the ladies was identified Brandi Maxiell , who is married to Jason Maxiell of the Orlando Magic. Much like Bambi’s entrance onto “BBWLA,” she’ll be coming on as one of Malaysia Pargo’s besties. So why does Malaysia have to keep bring her besties on the the show, Chile you are boring and we probably don’t want to see you. The other lady is Sundy Carter which we seen on the other season she is a good friend of Jacki Christie.

I just don’t know if I am going to like this foolish show. I thought they were cancelling this foolishness. I guess we will have to see what these angry birds will be doing.